UPDATE 4: What a beautiful day it is, folks! Disney has finally released a clip of Emma Watson as “Belle” singing one of our favorite tunes from the classic film, and our anticipation is through the roof. We dare you to not sing along!

UPDATE 3:  The most recent poster for Disney’s live-action adaptation of Beauty and the Beast has officially been released, and your jaw is going to hit the floor at how absolutely perfect some of our favorite characters look.

Peep the human portrayals of Emma Thompson as Mrs. Potts looking hella regal, Ian McKellen as Cogsworth, and Ewan McGregor as Lumiére. TBH, while the poster is a total 10/10, it is making it even more impossible to be patient for its March 17 release.

Mrs. Potts, Chip, Gaston, Lumiere, Cogsworth, Belle’s dad, and of course, Belle and the Beast all make an appearance, and if the trailer is any indication, the movie will stay incredibly faithful to the beloved Disney movie we grew up on. Excuse us while we twirl around our house pretending we’re in the castle ballroom.

UPDATE: Entertainment Weekly‘s latest cover reveal showcases the first look at Emma Watson and Dan Stevens as Belle and the Beast in their straight-up iconic ballroom dance scene. Basically, just be our guest if you can view this without tearing up and/or bursting into song. Tale as old as time…

Be our guest for an exclusive first look at @Disney’s magical and romantic live-action #BeautyAndTheBeast! https://t.co/jniafxmEpV ???? pic.twitter.com/xaIGIdc8EA

#EmmaWatson and Kevin Kline are a fairytale family in this exclusive #BeautyAndTheBeast photo. ❤️✨ In #Disney's animated version of the film, Belle is a big fan of reading while her father, Maurice, is an inventor. For the new live-action remake, that's changing in a BIG way. Click the link in our bio for all the details. ????: Laurie Sparham/Disney

A post shared by Entertainment Weekly (@entertainmentweekly) on Nov 2, 2016 at 1:02pm PDT

A post shared by Entertainment Weekly (@entertainmentweekly) on Nov 2, 2016 at 12:14pm PDT

A post shared by Entertainment Weekly (@entertainmentweekly) on Nov 2, 2016 at 12:02pm PDT

A post shared by Entertainment Weekly (@entertainmentweekly) on Nov 2, 2016 at 11:01am PDT

???? No one fights like Gaston! ???? #BeautyAndTheBeast #LukeEvans #Disney ????: Laurie Sparham/Disney

A post shared by Entertainment Weekly (@entertainmentweekly) on Nov 2, 2016 at 10:49am PDT

????Tale as old as time…???? #EmmaWatson looks stunning in the iconic yellow dress, #BeautyAndTheBeast fans! Click the link in our bio to see 8 other enchanting, exclusive photos from #Disney's live-action remake. ????????: Laurie Sparham/Disney

A post shared by Entertainment Weekly (@entertainmentweekly) on Nov 2, 2016 at 10:34am PDT

It’s a tale as old as time that remakes of beloved movies are usually a bad idea. But first looks at the live-action Beauty and the Beast remake might change our minds.

There was some old-school Disney magic in the first pictures of Cogsworth and Lumiere, and we can’t even talk about the trailer without our jaws dropping and eyes misting up a bit. Now, Emma Watson’s opening scene Belle dress has been revealed, and it’s too perfect.

You know the classic scene of Beauty and the Beast: Belle is strolling the streets of her small French village, saying bonjour and good-day to all the townspeople, and getting weird stares because the girl just wants to read a book. Sure she’s a little condescending to the baker (with his tray like always) and wanting more than this provincial life, but let’s let the young girl live, amiright?

Belle’s dress in the scene is iconic, second only to her golden ball gown in her dance with the Beast. And now we get to take a look at the concept art sketches for Emma Watson in the dress. For this fashion-forward star, the creators have edged up the look a bit 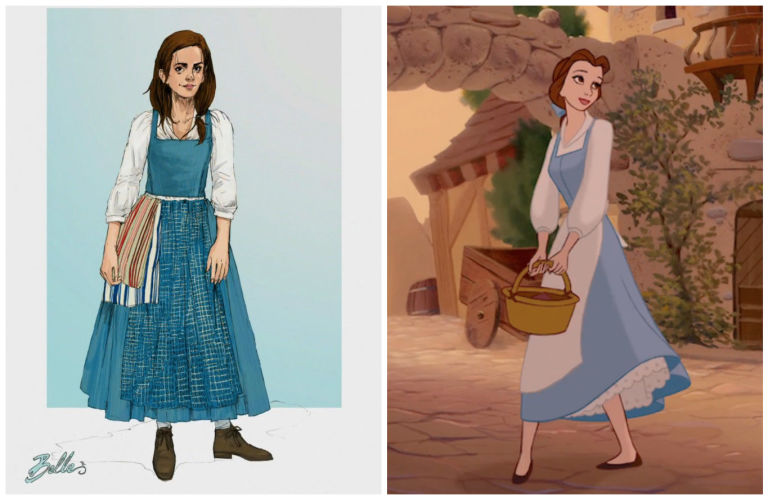 Thankfully, the young girl gets some sensible shoes to bounce around the town in, because those teeny flats were probably blister-city. Belle also trades in her lame basket for a super cool laptop-case-looking bag. Most importantly, no woman in that busy, dusty town can keep a perfect bun, so Watson’s hair is tousled and down.

As for Belle and her inventor father’s house, the concept art looks like they might have a bit more money in the bank than they did in the animated version.

Bottom line: If Disney would like to gift us with any more awesome sneak peeks of the live-action Beauty and the Beast, be our guest.